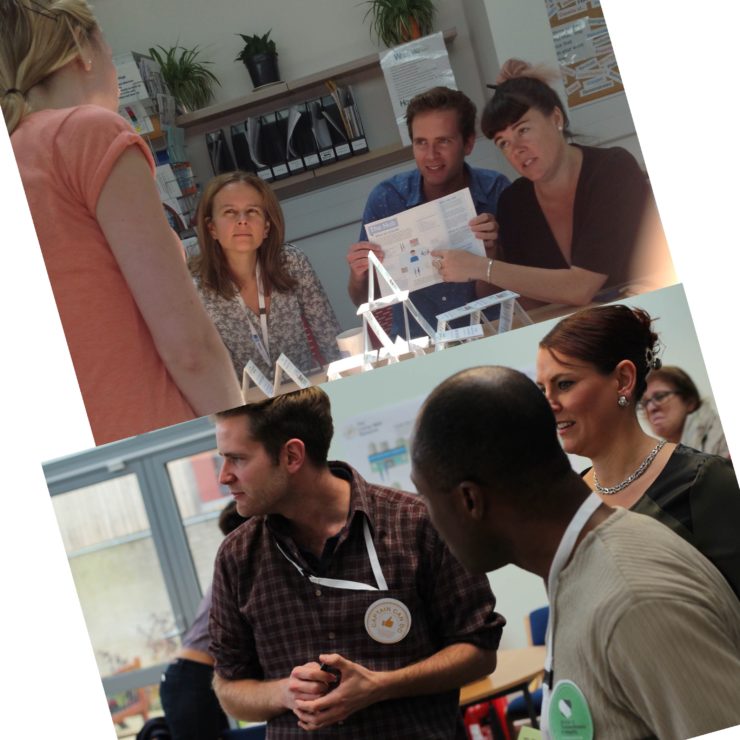 Mark Young has seen many changes in the way mental health services are delivered since he was involved  in helping to shape Lambeth’s wellbeing map.

Mark left Lambeth’s IPSA (Integrated Personalised Support Alliance) project as Alliance Lead Manager, working for both the IPSA and the Living Well Network Hub (LWN Hub) in April, moving north of the river to work with Mind in Hackney as the Recovery Services Manager.

Mark reflected on some of the innovative  projects he was involved with during seven years in the borough.

Prototype 2012
Mark  was employed as a Community Support Guide with Thames Reach when  he joined the Lambeth Living Well Collaborative’s (the Collaborative)  AAP (Assessment, Action, Planning) prototype in the summer of 2012.The prototype brought together a multi-disciplinary team of professionals and peer supporters to work differently with three key risk groups from secondary and primary care.

The Collaborative’s mission was to take the ‘mental’ out of mental health, putting  individuals’ assets at the heart of its remit.

Mark was part of the  Community Options Team (COT), which was set up to provide practical and social support to people with mental health issues in Lambeth, to support people to be discharged from secondary care or prevent them needing the additional support of secondary care.

Mark said at the time he found  the prototyping experience invaluable. It had  given him an excellent vantage point as the Living Well Network Hub, the new ‘front door’ to the borough’s mental health services,  opened for business. This way of working highlighted the co-production ethos to treat everyone as partners in service design and delivery.


Reflecting on those  intensive six weeks, Mark explained that “everyone invested a lot of effort, put their jobs on hold (or did their job as well, scaled down a bit). It was great to be able to meet up with the team three times a week. « I liked the fact that clients weren’t assigned to specific people, it was more a team’s caseload and that each member brought different skills… On the COT team we all have similar support service backgrounds.

«  I liked the way that every client was discussed in detail and really valued the input of peer supporters… While people did form specific relationships with clients, the open caseload as a team responsibility worked well.”

Peer Support focus
It also helped Mark to recognise that working with people on what works best for them can also be a bonus, for example, “engaging on a practical level (helping someone to have their flat cleaned and putting someone in touch with an old friend) felt like a result”. Having access to personal budgets also helped people’s goals to be more achievable. » Some of the ways people used their budgets included courses, laptops, gym memberships and bicycles …

Mark says having access to peer support advice was an excellent resource. It also highlighted different approaches to safeguarding and risk. “As support workers we tend to go out in twos at first to ensure things are ok… Peer supporters didn’t have the same barriers as members of the team may have.”

Looking back Mark says that it was « great that people had access to one-to-one peer supporters ».

Peer supporters from the first Missing Link cohort (a project also shaped via the Collaborative) where people used their lived experience to support others on the wards and as they left hospital had at the time said in the prototype that they felt valued, “that at last our voices could be heard amongst clinicians”,said one. “We were up for the challenge to be tested by the complex cases and everyone was very supportive, said another. “They appreciated our input, which was our lived experience and human-centred approach to service users. »

Commenting on the opening of the  new hub Mark identified the similarities, meeting regularly to discuss clients, “we have input from a number of teams with different skills/knowledge and good access to other services within the Living Well Network,” (the umbrella that brought together services and those in the community working together to bring change).


The second cohort of Missing Link peer supporters went on to  work with referrals from the hub for up to 12 weeks in the community. “I think the hub team are really open to doing things differently and as such appreciate the contribution of peer support, ” said Missing Link Coordinator Lucas Teague at the time.

« From what we’ve seen with the original AAP prototype having the right mix of people around the table in the right numbers helps to change the dynamic and bring a different perspective. This is crucial if we are looking to view mental health issues jointly and within a clinical and social context. «

IPSA vision
Mark was involved in COT for two years and then went on sabbatical just before the Hub opened. When he returned he was Senior Practitioner in the IPSA for about two years before taking up the Alliance Lead Manager role, which encompassed the Hub.

The IPSA helped to reshape  the lives of those at the complex needs end of the mental health spectrum … who had been long term in hospital or  carehomes . This had incredible impact on people’s lives and the system itself.

In its first year by identifying community alternatives to impatient care led to a 60 per cent reduction to rehabilitation wards (see link to report below) .

« It’s been great working with Mark, and we wish him well in his work with Mind in Hackney., «  says Bill Tidnam, Chief Executive of Thames Reach. « He’s been part of Thames Reach’s involvement in the Collaborative almost since the start, and he should be particularly proud of the work he has done with colleagues to make the IPSA a success. What this means is that people who had been written off, had the chance to begin to fulfil their potential to live fulfilling lives and contribute to their communities.  This is a great legacy to leave, and it perfectly reflects the principles of both Thames Reach and of the Living Well Collaborative. «

It was the success of this project that helped to grow the Living Well Network Alliance contract, a new approach in the health and voluntary care sector, which concentrates on people’s rehabilitation and recovery, not the result of individual providers; with everyone judged on overall performance.

Back on the wards
Before leaving Mark was involved in a  pilot project with Mosaic Clubhouse members visiting Rosa Parks ward at Lambeth Hospital,  meeting people on the ward and also accompanying them to the Clubhouse and other places. The project, Mark reported had overall been very positive with good feedback from people on the ward, and some good results in terms of engagement both on the ward, and ongoing engagement with Mosaic following discharge. One of the challenges had been facilitating visits off the ward while taking into account the amount of leave people have been given, which was something being addressed. This work is now moving to five days a week.

« Mark was central to the journey towards the Living Well Network Alliance, » says Sue Field, the Alliance’s Programme Director. « He was key in leading and participating in prototypes that helped us all think differently about all of our roles. He took all of this learning forward, enabling the voluntary sector role to expand, to leading our personal health budgets in the Hub, and voluntary sector workers in-reaching to inpatient rehabilitation wards, sorting out any practical barriers that would stop someone from being discharged. »

Pictured above: Mark Young with Sue Field and Stacey Hemphill promoting the Living Well Network Hub at a Mosaic Open Morning in July 2014 and with Gideon Lamptey and others at an event in February that year.

One thought on “Mark’s journey from prototype to blueprint”