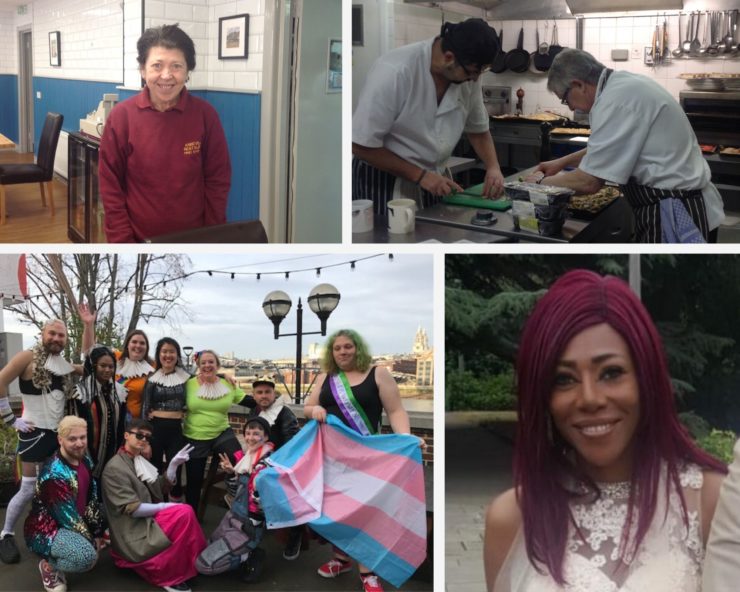 David welcomed everyone to the breakfast (First Step Trust team Oona, Anthony and Ashrafi pictured above top). He noted that the focus was on Peer Support in Lambeth. David highlighted that this was a principle that the Collaborative was committed to and had agreed on and should be investing in… we should be seen as a real disrupter of the way we do things around here.

But first, we remembered former Missing Link peer supporter and Certitude support worker Loy White (pictured above, lower right) who had passed away recently and unexpectedly. We read out tributes to her, see below.

Business of the day

It was highlighted that the Lambeth Hospital Public Consultation is now out.

It was agreed to have the Single Point of Access as a regular update at the Breakfast meetings.

There is currently a pilot for in-reach into acute wards, with currently 5 wards accepting peer supporters on wards. As it is a pilot and funding has not currently been confirmed the team need to think about how to withdraw from the wards.

It was noted that even though the money has not been confirmed, as it is on a non-recurrent basis, it should not reflect on the way the project is viewed. It is hoped that this project will continue and become part of core funding in the future.

It was noted that within the Long Term Plan (LTP) there is an opportunity to integrate Home Treatment Teams (HTT) and Peer Support and a plan to progress this. It is recognised that while Lambeth is further ahead on this agenda, there is still a way to go.

It was noted that we need to add in information around culturally appropriate Peer Support – once the money has been confirmed, this will be advertised.

There was a question as to where we put this information and where it should be owned -it was suggested that this will be put on the Living Well Network Alliance page on the Lambeth Together website.

Karen Clarke agreed to circulate the paper and ask for it to be updated by relevant partners and also to discuss with Neil as to how this can be a living and breathing document on a website for all to see.

There was a question that if we really valued Peer Support, what would we be willing to pay for it. It was agreed that there is a need to have diversity in the model; however we need to understand the difference and what we pay for.

There was a discussion re the outcomes for  PS groups to the wider outcomes group, it seemed almost like a hidden network sometimes..

· Making sure you’re clear why you want Peer Support in your organisation.

· That we employ people to make a difference.

· That there are clear roles; that peers are given enough to do and not wrapped in cotton wool so they can’t use their experience, or they have nothing defined and told to go ahead and do whatever you want.

· It’s important to have clear job descriptions, to employ people with lived experience, but people still need communication skills, compassion, etc; Just because you have lived experience it doesn’t mean you’ll be a good Peer Supporter.

· The importance of training peer supporters was discussed; generic training such as mandatory training as well as more specific training.

· The importance of training teams around Peer Support and how workers feel about peer workers.

· Peer workers should have supervision; both line management, clinical and group peer supervision.

· Rachel noted that Lambeth is starting to set up group supervision and anyone who is a peer supporter in Lambeth will be welcome to attend.

· It is important to keep people well at work. People worry about a relapse so what can be done to keep people well. This is for all team members; not just peer workers, you can’t look after them in isolation if they’re in a team.

We need to ensure that Lambeth values Peer Support in the borough. There is a question about how we would know that it is valued. Responses included:

· Peer Support projects permanent and not a pilot

· That clinical supervision and training are in place.

· That people get what it is and staff ask for peer workers to become part of their team.

· There are statements of valued lived experience in job descriptions

· That it’s embedded in all professions; and all levels. i.e. Chief Executive having lived experience. I want to be a nurse because I have lived experience and can offer X,Y,Z.

· That the blurring of boundaries is pursued,  and really embed co-production. That Peer Support is part of our DNA.

· There was a point that nurses don’t see people who are better. Once a person is recovered they are discharged from the ward and the nurses only see unwell people. Having Peer Workers on the ward would help nurses see that people do get better.

· There is the National Service User Network (NSUN) Peer Support charter that outlines principles that we could have a look at as a starter to adopt.

· There is the 4P to involvement that we could also use as a basis.

· There was agreement to commit to a Peer Support Charter for Lambeth and that this would be developed at the 10 year on event.

· Karen Clarke to circulate the Peer Support in Lambeth for all to update and for this to be put on a Lambeth website for everyone to use and access.

· Karen H. gave an update from Ursula who said being peer supporter with Missing Link had shaped her success and recovery journey.

•     Project Dare has rebranded and is now named London Dares. The new website is http://www.ldndares.co.uk

•     We have been working in collaboration with South London and Maudsley Recovery College & funded by Health innovation network & national lottery to deliver the LGBTQIA+ ‘Dare Sessions’ confidence and body image courses,  – that set participants Dares.

•     We supported participants to perform a version of VOGUE at Shakespeares Globe in the Autumn (pictured above, bottom left) and last summer put on a showcase devised by students.

•     We have been chosen by Guys and St Thomas Charity and the School of Social Entrepreneurs to be a part of their coveted health and wellbeing trade-up program. We have been selected as an organization that will help tackle childhood obesity and protect the health of those living with 1-2 long term conditions. The program hopes to support us in more stability as we continue to grow.

One student from an inpatient ward was able to be openly gay for the first time in his life. He created & performed a poem containing the line ‘I am gay and proud’ which was the first time he had spoken these words in public. He was then awarded a ‘Golden Glow Award’ for ‘Progression into the Community’ of which his commitment to Project Dare was a big part.

Another student has rediscovered their love of dance, re-joining the gay men’s dance company after previously leaving due to anxiety, whilst another has found the courage to come-out as Trans Non-Binary to their family and friends.

James updated on work with Lambeth Carers, including the upcoming Carers Card . Click HERE to find out about current support on offer to unpaid carers.

We also received a moving message from Stef Abrar, who we have been working with on Lambeth’s suicide prevention strategy. Stef has left to work with Public Health England in the public mental health team at Waterloo.

‘It has been a pleasure working with you and seeing how well the Collaborative work,’ she said, with a reminder ‘not to forget the isolation and pressure that can be felt by middle aged men, leading them to take their own lives’. Stef said she had had a recent experience of the huge ripple effect that suicide has on communities and families in particular.

‘It has brought home to me, in a very personal way, the need to continue to work with middle aged men on talking, emotional health and hope.’

She said later ‘we expect the risk of suicide to increase during and post covid as people’s coping mechanisms come under strain and financial anxieties kick in.

Thank you for the education on joint working – it has been so easy to input into your discussion and meet people in a way that is so much more difficult in other places.’

Tributes to Loy White, read out at Collaborative breakfast

I remember Loy really caring about the work she did as a peer supporter. Making a difference to the lives of those she was looking to help, really mattered to her. She had a good heart!

I am incredibly sad about Loy. She was a beautiful soul, kind and very funny, with a bit of a naughty streak 🙂 She was an incredible cook.

Loy was a beautiful woman who was a ray of sunshine in many lives. May she sleep in perfect paradise.

Next meeting tbc as COVID-19 became part of our lives.