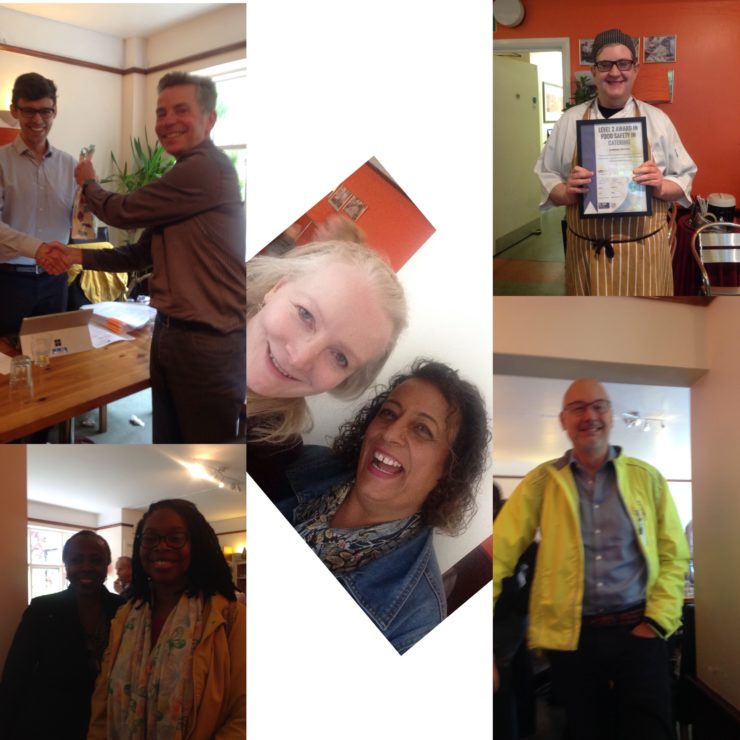 This month’s breakfast, held during Carers Week, 10-17 June, focussed on peer support and it was timely to pay tribute to stalwart Lisa Shokir who sadly passed away in May.

1. Reflections on the Last Meeting

·The Collaborative reflected on the presentations on physical health at the last breakfast meeting and felt that they had been extremely useful and impactful.

·It was agreed that it is important to keep physical health a high priority in Lambeth and it might be helpful to consider how the Collaborative might influence the Living Well Network Alliance around this topic.

·Karen opened the meeting with a dedication to Lisa Shokir, a long time peer supporter (before the Collaborative) who passed away in May, aged 62. Karen explained that Lisa had been involved with the Ace of Clubs and the Effra Centre and took part in early research on personal budgets in Lambeth. She was a founder member of Vital Link (service user and carer engagement group feeding back to the then primary care trust in Lambeth) helping to shape Collaborative initiatives. Her work with Lambeth Vocational Services (SLaM) for those at the sharp end of benefit changes had made a massive difference to people’s lives.

The  Collaborative commended Lisa’s dedication to use her lived experience of mental health issues to help others.

·Karen highlighted the notes that had been circulated from Mike Rogers, Mental Health Engagement lead, Healthwatch, Lambeth following a Reflection session with the Lambeth Peer Support Network, which has been meeting monthly.

She then gave a brief history of the development of peer support in Lambeth, acknowledging Collaborative members and the support of Mark Bertram, Vocational Services (SLaM). She outlined what she felt were the priorities for action, mentioning the importance of not falling through the gaps in services, developing career opportunities for people, the need for autonomy for peer supporters, not reinventing the wheel in terms of peer support models and delivering peer support at a greater scale. Thanks to Zeenat (Pic: Centre right, with Emma Shellard, Service user IPTT consultant) for sharing her peer support journey.

·Michael talked about the positive impact of taking people out from the wards and supporting them to engage with the community and do everyday activities such as sharing food and going to Mosaic to socialise.

·Sue noted the impact that the project had had on the wards and the refreshing change in atmosphere that it had created. She also commented on the importance of the regularity of the activity, taking place every day for 3 hours.

·It was suggested that the initiative was mainly focusing on how we bring the outside in and help people build connections with others in the community.

·There were a number of questions about the initiative, including:

o Cherry raised a question around whether the peers can be formal escorts for people on leave and Sue suggested that this issue is being worked through.

o There was a discussion around the range of organisations involved in the programme and the importance of ensuring that the training offer for the peers and the approach that they take is consistent amongst the different organisations. Sue suggested that this would be part of Thames Reach’s role as programme coordinator.

·Sue gave an overview of the peer support specification for the Living Well Network Alliance (LWNA).

·From 1st July, 3 new elements of the LWNA service offer will go live, including the Single Point of Access, which will assess people and connect them to the appropriate offer, the Integrated Front Door, which will provide brief interventions and the Mobile Response Team, which will be able to visit people at home within 4 hours.

·The peer support specification outlines how peer support will be integrated into the Living Well Centres, with people being seen individually and in groups, with a total of 10 peer supporters.

·One of the key principles of the service is that if people move around between services, then peers can continue to work with them, which provides a stable, consistent relationship.

·David updated on his peer support proposal, which has gone to Health Education England.

·He outlined the background to this proposal, which started with conversations with hospitals in the local area, including Guy’s and St Thomas’ and King’s, about people using A&E in mental health crisis.

·This is a major challenge for the hospitals in terms of patient care and in terms of resources, using up to £10m a year.

·Therefore, there was a discussion around creating a new professional workforce in relation to peer support and locating them in A&Es to support people in crisis.

·The proposal is to put peer workers in every A&E in South London and it was suggested that it was important for this to be sustainable – rather than a time dependent project with insecure funding.

·Other areas have trialled similar things, for example North Middlesex Hospital had 6 peer supporters working as part of the psychiatric liaison team, which was successful but only had 12 months of funding.

·It was discussed that the first hour in A&E is vital and that a more positive experience here could substantially change the following interactions.

6. Peer Exchange and Solidarity in a Crisis

·April gave an update on the peer support activities being led by Certitude.

·She talked about the Connect and Do space and the range of activities taking place, which she said is helping to break down boundaries between staff and service users.

·She also talked about how peer activities and workshops had evolved organically following people attending classes at the space.

·She also told people about the event on 27 June (‘The Big Connect’), which will be an open day with a number of taster sessions.

·The group reflected on what the next steps should be for peer support in Lambeth and people had a number of suggestions:

o Ieuan commented that it was important to ensure that we know what is happening across the whole system. He suggested that we need to consider the role of the peer support meetings currently taking place in Lambeth and whether they have a more formal role going forward.

o David raised the question around the funding pot for peer support and securing sustainable funding going forward within the LWNA.

o Alice suggested that an Equality Impact Assessment for the whole peer support offer in Lambeth would be helpful.

o There was a suggestion that alongside the data, we also need to continue to compile people’s stories and use these better.

o Finally, Adrian (Pic: bottom right) mentioned that we should focus on the opportunity to work with Primary Care Networks on this agenda.

Finally, Chair David Monk made a presentation to Ieuan (Pic: top left) who left Lambeth at the end of June to train as a mental health social worker. Ieuan came to Lambeth on a placement from the NHS graduate management training scheme but stayed on for three years after this, working in the commissioning team at Lambeth CCG. He commented on the importance of the Collaborative in bringing people together on an equal platform to discuss mental wellbeing in Lambeth and thanked the Collaborative for their support. Members said he will be missed  and wished him all the best for the future.

Click here for Lisa’s personal budget story from the archives