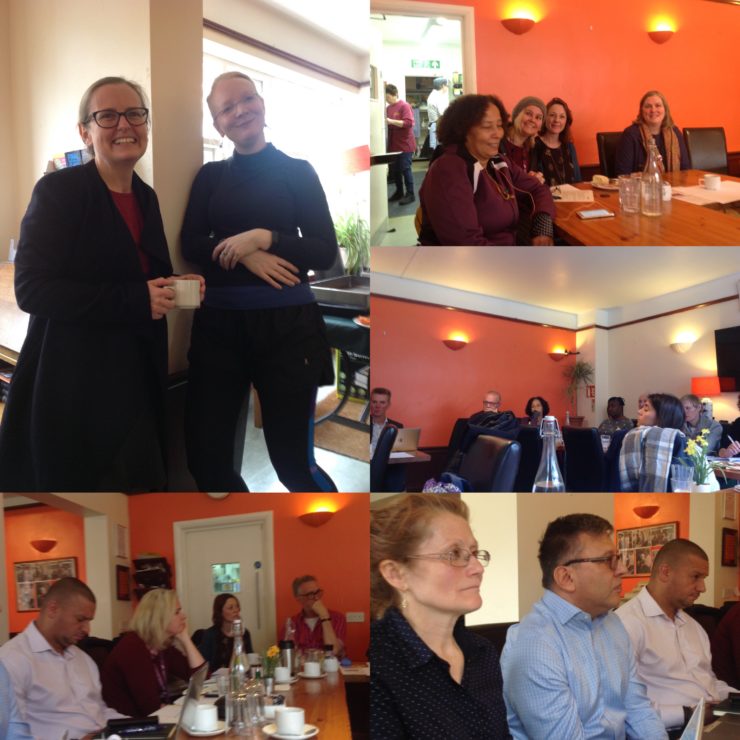 Some 26 of us braved the rain and winds to attend this month’s breakfast meeting at Abbevilles Restaurant.

We welcomed Jess Penney and Monica Geraghty who are leading at the Living Well Network Hub following the departure of Stacey Hemphill.

We reflected on the discussion at the last meeting and noted that action had followed.

The issue of IAPT’s (Integrated Access to Psychological Therapies) relationship with the front door (to mental health services), was subsequently discussed at the IAPT stakeholder board and is being pick up as part of the Collaborative’s single point of access development.

It was agreed after a lengthy discussion that we should devote a big chunk of time at a future collaborative meeting to physical health. The wide range of initiatives in play were noted, and that addressing the inequalities experienced by people with mental health problems around poor physical health was one of our most important outcomes.

We agreed we would have a feedback loop slot at every meeting as part of our ‘critical friend’ role and that we would forward the notes onto the Living Well Network Alliance Leadership and Management teams.

Sue updated the meeting on key work streams, including the Evening Sanctuary extension to seven days per week and single point of access.

Denis advised the meeting that the Alliance was finalising its budget for 2019/20 following the better than expected financial settlement for the NHS, for Lambeth this was c6% increase.

However, it was noted that despite this welcome news, the actual award felt like at best a standstill award in light of the huge financial pressures in the system including – more demanding Five Year Forward View Targets (e.g. IAPT); costs of living pressures across all providers, including Voluntary sector providers who haven’t had an inflation uplift for over 7 years; and over the demand for acute beds.

“February was a gentle friendly month. Lots of people attended, some for just a few days. In total there were 98 attendances from 21 members. There were 16 referrals, fifteen from external sources, including six from GPs. Ten people attended for the first time. Members reported feeling on average 5 out of 10 on arrival and 7 out of 10 by the end of the night. People appeared very relaxed this month and there were lots of group conversations on wide ranging themes. Most of the groups now run until 8pm so we often have a lot of people in early on doing interesting things. An ex-Sanctuary member will be running the Friday mixed-activity group from next month.

Liz shared her experience as a new volunteer at the sanctuary.

Peer Support – Agreed that we should hold a substantial session on future of peer support at a future meeting (possibly May 2019) building on the network instigated by Ambesit, Karen and others. Sue noted a peer support service was being developed by the Alliance.

Alice updated on the SLaM Service User & Carer Advisory Group , which includes being part of the Alliance Inpatient workstream. Peer evaluators have also had conversations with 52 residents in Certitude housing units to understand their experience of services and the next step is to identify themes to feedback. The group is also developing a leaflet for carers on wards.

Black Thrive – Sarah updated the meeting on development of the SMS dashboard and the progress that has been made.

Guy introduced the current (work in progress) performance dashboard, which was a tool to help focus on key service areas including beds, community services and placements. It was acknowledged that this was far from perfect, but a tool to help the Alliance areas requiring attention and improvement. It was agreed we should bring this to the collaborative on a quarterly basis.

Denis introduced the outcome’s framework, which underpins the Alliance; it was noted that there was much crossover with the Black Thrive Shared Measurement System. An Alliance working group has been set up with support from Implemental / Kings Improvement Science to get us to a position by 1 October 2019 to report on outcomes. A key challenge is to develop systems that capture data that enables people to feedback on their experience and impact of services and the support they have accessed. It is proposed to hold a wider stakeholder, partnership event in May on outcomes, details to follow.

5 Karen reminded colleagues about Dorrel’s story and the Home Office hearing in April. Dorrel thanked everybody for their support.

Next meeting Abbevilles, Thursday April 11, 8-10am