The North Lambeth Network Hub opened on 18 November 2013. It was born out of a desire from the Lambeth Collaborative to improve outcomes for service users and to grow an integrated structure of support for people in primary care.

The Hub is comprised of:

Its aim is to work within a ‘primary and social model’ of support and work co-productively with service users and carers to support them to recover and stay well, be able to make their own choices and participate in their communities.

Together we are the new front door to mental health services in North Lambeth as we have replaced the community mental health team function of deciding who would benefit from secondary care intervention and we are beginning to work with people being discharged from SLaM back to their GP.

We are still developing the service but can now report on our initial six month activity.

Our main aims are:

We also want to address GP concerns as they have reported issues of:

We offer people up to 12 weeks of ‘re-ablement’ support. This means offering focused, goal orientated support together with a wider Network of services to support people to learn or reconnect with their skills to foster their recovery.

People being introduced to the Hub

Figure One: Numbers of referrals received by the Community Mental Health Team (CMHT) and numbers introduced to the Hub. 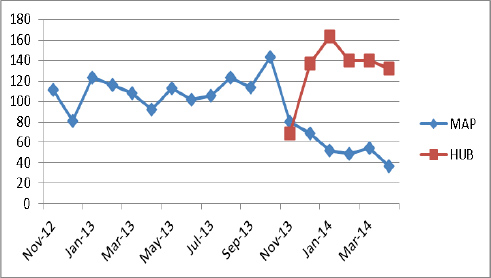 Most service users are not known to SLaM or other mental health services or Accident & Emergency Departments. Most are introduced by the GP and 40% (309) of people who were introduced were offered alternative support via the Hub.

What support are people receiving when they are introduced?

One of the key strengths of the Hub is that people can receive the help that they need from the outset, for example if someone requires a medical assessment, or support with their medication, and also has issues with their housing and benefits; teams can work with the person immediately. The chart below shows the numbers of people who were helped by the different teams.

Figure Two: Numbers of people who were supported by the Hub 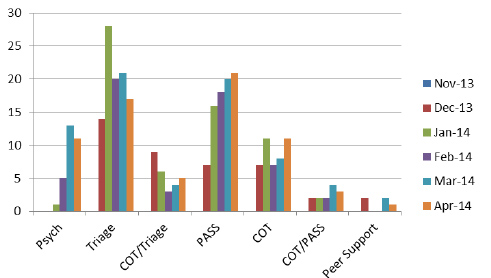 We now have a service user feedback form, but to get some early results we asked 5 peer supporters to contact 60 people to ask them about how they found the service. They were able to talk to 17 people.

–  The majority of people reported their experience as ‘excellent’ or ‘good’.

Improvements suggested centred around wanting more than 12 weeks of support, wanting more information about what was on offer, and the need to improve the waiting area.

Similarly, we asked GPs what they felt about the service. We received 10 responses from 6 surgeries. The following was found;

‘It is much better than the previous CMHT’. It really seems to be better organised than it used to be ‘Thank you’.

Suggestions centred around how we communicate the different services to users so that they are not confused, giving the GP a key contact name of the person supporting the service user and a suggestion of how the Hub can support people on discharge from SLaM.

One GP was concerned that people ‘are still getting bounced around the system’ meaning that sometimes people are referred to lots of teams before they receive help.

We have lots to do, but our priorities are:

1. Thinking about how we work in a more co-productive way. We want to:

3. Develop how we are working to support people leaving SLaM.