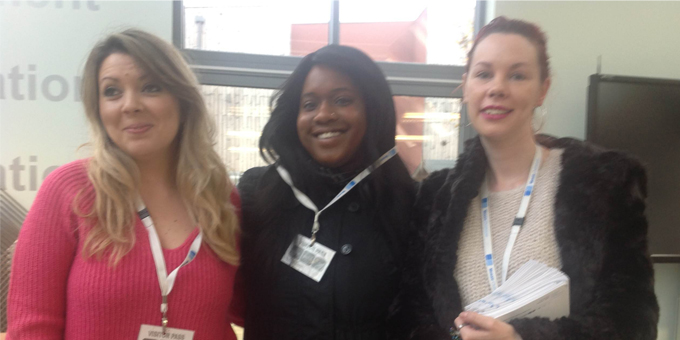 Though only two years and a half in the UK Maria Gonzalez has had an interesting journey from coffee shop assistant to the new Team Leader of Solidarity in a Crisis.

Maria (pictured left) studied psychology in her native Spain, she is from Seville, and had hopes of becoming a clinical psychologist but her journey took her to different places. She became a carer to her father after he suffered a stroke when she was 10, and although it was always challenging things got worse with time. She battled her own depression when this task became overwhelming. “I stopped my Psychology degree for a time (which I managed to finish later and graduate a trained psychologist).”

She is committed to volunteering. “I’ve been volunteering my whole life,” she says… Part of her studies included a volunteer internship in hospital acute services.

Three years ago Maria, who spoke no English, and her partner made the decision to move to London and her fascinating journey began. “You can only learn so much English talking about croissants and bacon butties”, ” says Maria wryly about her coffee shop job (she became a trainer with the company) so I decided to quit that job.”

She joined an organisation in Greenwich called HER Centre, which was working to empower woman by building on their skills. She became a trustee of that organisation.

From there she worked as a mental health support worker in an eating disorders unit… “I wanted to do something for people,” she adds.

She became Project Assistant with the Volunteer Centre Lewisham in two different projects: Helping Hands, which provides practical services to people within the community and Time Out, peer support, where service users accompany others to appointments, such as to hospital, as well as shopping, going to the gym,etc.

She had been all that time volunteering for Mosaic, which works with families of children who have been sexually abused. Now she is employed there part time and manages the organisation’s training.

“I have been always interested in supporting the most vulnerable: that is why I did my internship in an acute area and wards, and why I volunteer for Mosac,” says Maria, and that’s why I am looking forward to the challenge as Team Leader of Solidarity in a Crisis.”