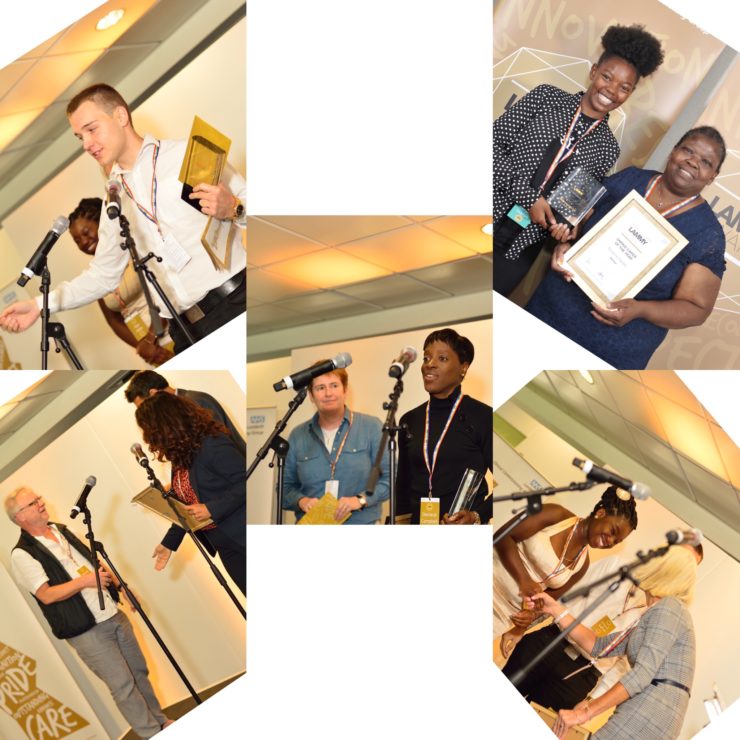 The endless toil and dedication of local carers was highlighted in powerful testimonies at NHS Lambeth Clinical Commissioning Group 2019 Lammy Awards on September 4. Dr Adrian McLachlan, CCG Chair welcomed people to the inspiring event at the Kia Oval that also recognised staff and volunteers going the extra mile in their communities.

“Autism rocks,” declared a proud Deniece Campbell, from the Kia stage as she was honoured with a People’s Choice Award. Deniece who cares for her young autistic son was awarded for the impact she had made within the BME community, running her own peer support group and ‘advocating to improve the quality of life for children with special educational needs and disabilities, their parents and carers’.

Roxeanne Daniels won Unpaid Carer of the Year having cared for her mother who had cancer and an older sibling with mental health issues. She also cared for her younger sister with Downs Syndrome for 28 years.

Her daughter said: ‘She always puts the needs of others before her own, even when she is not well herself. My mum is one in a million; a true star in my eyes’.

Both Deniece and Roxeanne are members of Lambeth Carers Strategy Group, which launched an ambitious action plan in June to enrich carers’ lives (see link below).

Donna Crawford, who cared for her bed bound mum Hazel was runner up and was praised by Loughborough Farm for the community spirit she had brought to Styles Gardens where she lives.

Meanwhile, Richard Ludford, nominated by Alice Dias from the Carers Hub Lambeth, moved those at the ceremony on collecting his Young Carer Lammy award: “I didn’t even know there were awards for people like me, “ he said. We don’t do it for the recognition, we do it for our family, they love us and it’s us giving back to them.” Richard, who is now 18 cares for his mum, Marianna, who has a seizure disorder and cerebral palsy Since an early age, Richard and his younger sister, Liz, have been responsible for the upkeep of the house, finances and shopping. Richard is also the main support for his sister, who is now 15 and has been a part of Young Carers since 2017, participating in their activities and peer support groups. Runner up Ose Odia was welcomed on the stage also.

Other staff and volunteers didn’t cease to inspire the gathering.

Odette Haase, Health Care Assistant was nominated for the second People’s Choice Award by a number of patients and her colleagues for her fantastic work at The Corner Surgery. She was passionate about helping people with long term conditions such as obesity, hypertension and diabetes and enjoys helping patients make positive changes in their lives.

The team, nominated by Dan Stoten broke new ground with an impressive new  programme to help fathers-to-be in Brixton Prison play the role of Dad following their release.

The Lambeth Approved Mental Health Professionals Team (AMHPs) Lambeth Council were honoured with the Lambeth Together Award – adult services. The team (nominated by Cameron Russell), are qualified social workers who have additional specialist training in the Mental Health Act.

‘This team has a long history of working well together through a collaborative approach with the patients, family members, community mental health team and hospitals. The team ensures that the patients’ rights are respected throughout the assessment process. The team regularly work with courts, psychiatric inpatient services, the police, the London Ambulance Service, community psychiatric services among others.

Despite increased pressures on the service, they continue to meticulously work through the assessments in a timely manner to help to reduce the distress of patients and promote their recovery. The team have a fantastic reputation and always put their service users first. A fantastic example of a team working together to promote the best outcomes for patients in Lambeth.’

Professor John Moxham, Director of Value Based Healthcare for King’s Health Partners received the Outstanding Contribution to Public Health Award. He made a powerful speech illustrating his passion for improving health outcomes for local people. John has spearheaded work on the development of the Vital Five. He believes that reducing obesity, smoking, harmful drinking, controlling blood pressure, and identifying and improving poor mental health would strengthen multiple care pathways and massively increase value. He will be missed when he retires later this year.

It was a great day all round with the AGM part of the meeting recording a year of progress and success in achieving all the financial duties in 2018/19.

Re Unpaid Carer award – We are sorry to report that Donna’s mum Hazel passed away on Monday February 10, aged 85.

Click link below to read the action plan for carers