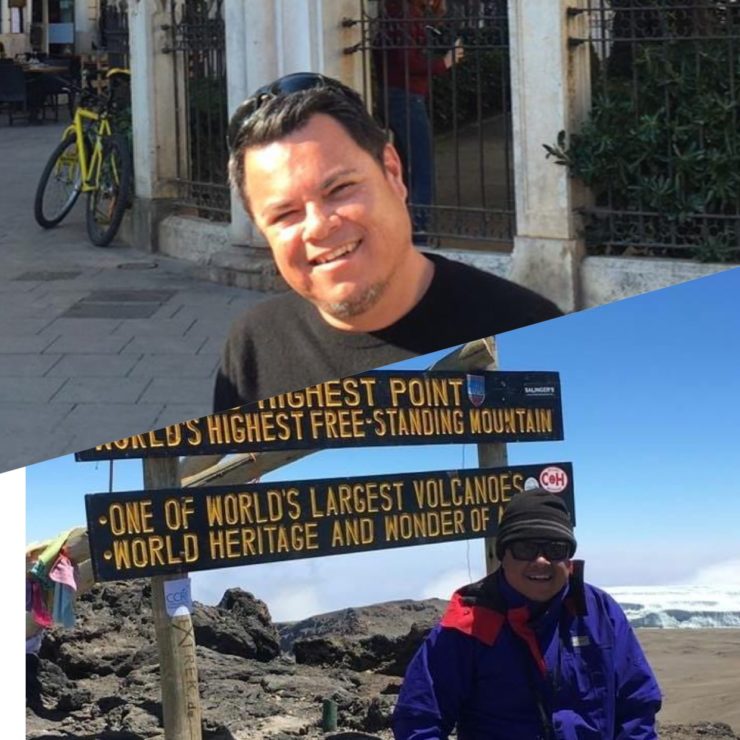 When I first met Charlie in 2016 he was working as a peer supporter for Solidarity in a Crisis (Certitude). His insight was inspiring, particularly when he came to speak to our carers’ group and shared how important he felt it was to have the love and support of your family to get through a mental health crisis.

In May 2017 during Mental Health Awareness Week, Certitude shared Letters of Hope from across the organisation asking people, ‘If you had the chance to go back and tell yourself something when you were struggling with your mental health, what would you say?’

Charlie reflected movingly on a time when he had struggled.

‘I know you feel you have to be strong for your family but believe me, deep down you know they will want you to take care of yourself and be there for you. Never feel like you need to go through all this by yourself, speak up, someone will always be there to listen. I wish I could tell you what you need to do to change the way you are feeling but I know you are stubborn and know you wouldn’t listen. The fact is you are desperately in need to talk and stop the chaos that will follow…’

A few months later I was overwhelmed to hear that Charlie was climbing Mount Kilimanjaro…   since then he has been building on his skills and sharing his rich life experiences.

When I bumped into him in Brixton not so long ago,  he had passed levels 2 and 3 counselling courses at Lewisham college, which he described as ” a two hour journey on a Tuesday evening… This was very challenging but I gained a lot of esteem from my peers as I always disclosed my condition.  I believe doing this was the right thing to do if I want to be congruent and work on my “stuff” in the journey, ” he says as he takes up his story…

“People have been impressed with my recovery and this encourages me to achieve more” says Charlie who was born in Peru (his mum is Peruvian and his dad British). He came to the UK in 1987 when he was 12.

“Climbing Kilimanjaro in September 2017 made me realise that I have strength I had not been aware of.  Also it made me realise that my diagnosis and the effects on my ability to function was a much more difficult “mountain” to climb.  This is important for people who do not understand psychosis and maybe other conditions, it is a horrendous, difficult place to be.  Apart from climbing Kilimajaro, walking across Spain three times has nothing on the symptoms of psychosis, from my point of view.

“Two years on and I have finished a Diploma in Therapeutic Counselling, which means I am a qualified Counsellor. It is a great feeling and I have learnt so much.

“I have great references from tutors, having passed my finals (only half of my peers did so) and handing in my portfolio has given me immense pleasure and now I am able to relax a bit.

“I have been seeing clients on a placement at The Awareness Centre (south London) for over a year, working with paying clients with various presenting issues.  Am at Lambeth and Southwark Mind presently working with clients with more complex mental health issues. Have had lots of great feedback from clients, one saying I’m the best therapist he’s ever had. I’m also part of the  Psychosis Therapy Project (PTP) at Mind, working with people with psychosis.  Having lived experience of psychosis makes sense that I want to pursue my journey helping and supporting people with this distressing condition.”

Joan Kennedy, Manager for the Psychotherapy Service says: “Although relatively new to the psychotherapy team here at L&S Mind Charlie is already a great asset. His approach with people with complex mental health needs reflects the deep insights he himself gained through his own journey to wellness. Clients feel safe and enabled to share something of their troubled inner worlds. “

Charlie has also been working “ad hoc with the Treatment Review and Assistance Team (TREAT) at South London & Maudsley under Professor Oliver Howes, a specialist in Clozapine (anti-psychotic). I have met with sevice users and their families to talk about my own view and insight with this medication.  Recently we made a video to use as a tool for professionals and carers to understand what it is like to be on various medications with their side-effects and the condition itself.

“It hasn’t all been rosy… there have been problems with family’s health, and my own mental health suffered last year with a tribunal for some financial help, plus  the content of the course, which brought up a lot of stuff. ”

As he heads for pastures new Charlie says he is  sad to have left  Solidarity in a Crisis in July.  “I have learnt so much and worked alongside the loveliest of people.  I will cherish my time there as it is the stepping stone to where I am and where I am going professionally.”

Says Moyo Adofo, Manager of Solidarity in a Crisis:

“In the three years of managing Charlie, I have seen him come in leaps and bounds personally and professionally. It has been a joy watching Charlie grow in so much confidence around his work and also in his own self development. Charlie is lovely and was such a valued member of the team who likes to go the extra mile for the people he supports. In his time with us, he has been involved in so many projects and he was recognised for this when he won best colleague at our annual Michael Rosen award in 2017. I really admire his ability to be with people at a time of crisis in a way that is containing and comforting. We will miss him very much”.

Charlie was due  to go on a placement in Sri Lanka in August teaching English and working hands on with people experiencing mental health and learning disability issues.  “Due to the problems out there means I have had to change the placement to Mysore in India for February next year, “he says.

“I have never felt better going to yoga (I’m rocking the bow pose !) jog, swim and trying to ‘buff up’ with a pair of dumbells !!  Also I am eating well apart from the odd pizza and other foods that may be classed as ‘junk food’ but hey,  you gotta live !!

“For now I will take some well needed time off with the family of whom I love and owe so much and then look at where to go for the next part of my journey.”

One thought on “Many mountains to climb”

@LondonADASS Virtual Carer’s Festival is free and easy to join from the comfort of your own home.   If you haven’t… t.co/3mtRVQ9S18

💜Read about Mosaic Clubhouse and its crisis Sanctuary service reopening to members and how to make a referral here:… t.co/x5WE93qTa6