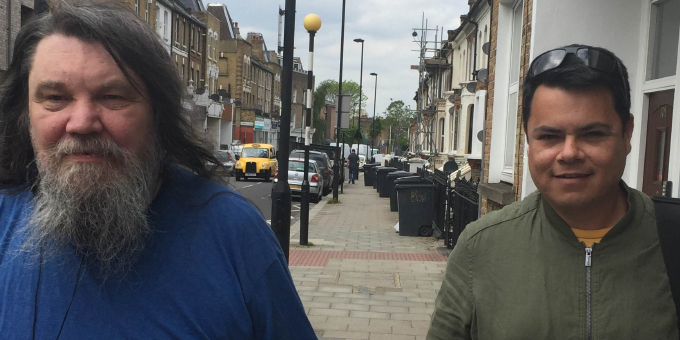 Charlie Wright is a Peer Supporter with Solidarity in a Crisis and sees the positive impact that forming good relationships can have on people. Here, he shares his experiences of working with Barry.

Originally from New Zealand, Barry moved to England in the 1970s with his father, who sadly died a few years ago. He had worked all of his life loading and unloading haulage containers to farms in New Zealand, also in Blackpool Pleasure Beach and in the London Underground. Barry was recently diagnosed with Generalised Anxiety Disorder (GAD) however has struggled with anxiety, in his words, ‘for as long as I can remember’. GAD is a debilitating issue for Barry and this, along with a lack of confidence, means that he doesn’t go out very much.

Barry also has a stammer and has found that people haven’t always had the time or patience to talk with him, which has left him feeling very isolated. I have always been very patient with Barry, giving him time to say everything he wants as he certainly talks a lot!

When we first started talking about meeting in Barry’s local community, he talked a lot about his anxieties around leaving his home and going out, so we made sure we met somewhere very near his home where he felt comfortable. For this first meeting, we went for a short walk to a local park where he felt he could relax. It was during our second meeting at a local coffee shop (a 5 minute walk from his house) that Barry admitted he had never ventured out that far from home before.

Through our meetings, I discovered lots of different interests that I shared with Barry – computers, the internet, music (specifically heavy metal and classical) and also travelling, something he wants to explore a lot more when he is able.

During our third meeting, I started to notice little changes – little differences which have reassured me that he is starting to grow in confidence, such as showing an interest in his personal presentation and wanting to buy new clothes. Barry has also shown an interest in visiting the Mosaic Club House and the Wellbeing Centre in Clapham which would mean building more relationships with people and has even suggested he might considering volunteering for peer support work in future.

Through the relationship that I have built with Barry, I have observed Barry’s willingness to trust me to support him emotionally and access things in his community. A marked difference from going to a park near his home, to venturing out to his local café and now engaging in activities at the Clapham Wellbeing Centre. Barry continues to challenge himself and takes steps to overcome his anxiety, whilst trusting me as a support system to help me in achieving this.

When I spoke to Barry after our visit to Clapham Wellbeing Centre today, this is what he said:

“Knowing that Charlie has lived experience of overcoming his own crisis made it easier for me to engage with him. On our way to Clapham Wellbeing Centre today, we sat on top of a double decker bus, something I haven’t done in 3 years. What really helped with my anxieties whilst on the bus was being able to talk to Charlie”.

Barry shows a constant eagerness to enhance his lifestyle and beat his anxieties and, with the new relationships he is now developing, I fully believe he can.