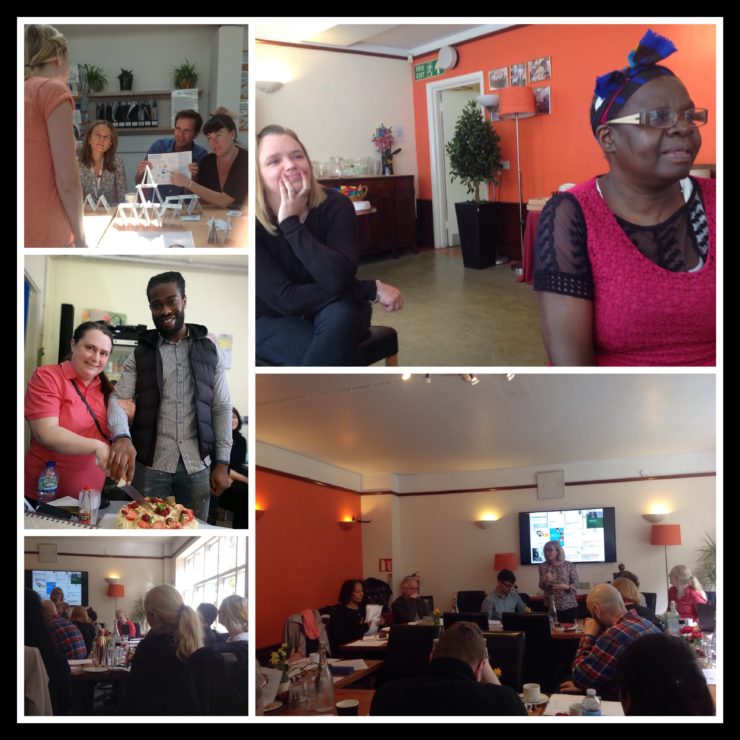 In the run up to Mental Health Awareness Week 13-17 May, there was a lively discussion with members highlighting some of the activities that help people’s wellbeing, including comedy and dance. Physical health was high on the agenda too with some startling facts and figures to help challenge our way forward.

Notes of the previous meeting
• The group reviewed and reflected on the notes from the last breakfast meeting in March.
• It was noted that while physical health was the focus of this meeting, there is also a plan to have a larger dedicated session on the subject.
• It was agreed that we would focus on peer support at the June breakfast meeting and then have a substantial session on the Living Well Network Alliance in July.
• The group reflected on the last discussion that was had around outcomes and Ieuan updated that a working group had been established for this, which would be reporting back regularly to the Collaborative.
• Karen reminded the group that it is carers’ week from June 10 and that there is a SLaM Carers’ listening event on June 28.
• Nozomi also updated on a programme that she has developed, which uses drama techniques to develop empathy and non-verbal communication. She is looking for a number of service users to attend the session she is holding and will send out more details to the Collaborative about this.

Physical Health Support – Key Targets and Indicators
• Moving into the main focus on physical health, Joiss gave the group an introduction on the key statistics, targets and indicators in the area.
• She explained that men with serious mental illnesses die 20 years earlier and women 15 years earlier. People with mental illnesses are 4 x more likely to die from digestive diseases, 4x more likely to die from respiratory diseases and 3x more likely to die from circulatory diseases.
• Alcohol, smoking and exercise were also cited as important factors.
• Joiss also explained that the CCG has been commissioning GPs to give people with mental health issues physical health checks for a number of years. NHS England brought out a specification for this in September 2018 and started monitoring in October 2018.
• The checks are in relation to blood pressure, alcohol, smoking status, weight, blood glucose levels, and cardiovascular risk.
• There was a target last year of 50% of all of the people on the SMI register to have all of the physical health checks. Performance at the beginning of the year was 32% and at the end of year, it was 40%. This year, the target is 60%.
• Joiss highlighted that there is significant variation across the various checks, with blood pressure and alcohol at 84%, smoking status at 78%, weight at 63% and blood glucose and cholesterol at 57%.
• There is also significant variation between the different practices and we need to ensure that all practices are doing these well to avoid the postcode lottery of good care. It is planned to explore practices which are doing the checks well and look for learning.
• There were a number of questions and reflections on this, including:
o Sue asked whether there is there potential crossover with SLaM physical checks and people not being picked up as a result? Joiss suggested that there could be and argued that collaboration across primary/secondary care is vital to address this challenge.
o Sarah commented that a group with very similar outcomes historically in terms of physical health checks is people with learning disabilities. She said that people felt that they were going to be criticised and informing people better around the checks and changing the culture to create a supportive dynamic had a big impact.
o It was agreed that the Collaborative needs to think about the culture of how the offer of physical health checks is made – and that we need to talk to service users about how we could improve in this area.

Tobacco Dependence
Mary Yates also joined the Collaborative this month and gave a presentation on tobacco dependence, which can be seen here.
• Mary started off by explaining her belief that it should not be referred to as smoking cessation or a lifestyle choice, as tobacco dependence is a chronic, relapsing condition.
• She explained that while 15% of the general population are smokers, for people with serious mental illness, this figure is far higher. While tobacco control measures appear to have had a significant impact on the general population, they appear to have had very little impact on people with SMI, learning disabilities and people in prison.
• Mary explained the impact of tobacco dependence – and it is the single biggest avoidable cause of cancer in the world, causes a third of deaths relating to cardiovascular disease, 80-90% of deaths from COPD.
• It can also cause osteoporosis, gum disease, lost teeth and oral cancers.
• She also explained that it contributes to poverty, with many people with mental health issues spending up to a third of income on cigarettes.
• People with SMI are X3 more likely to smoke, and to smoke more heavily than the general population.  They   are more likely to develop smoking-related illnesses, and less likely to receive help to quit.
• Smoking is also associated with a wide range of different factors, such as:
o Longer length of stay
o More severe psychosis
o Higher rate of relapse
o Association with suicide
o Poverty
o Higher doses of medication
o Association with illicit substances
o Multiple health problems
• Mary reported that while the smoking figures for inpatients are changing, the figures for people once they are discharged in the community is very different.
• Mary questioned whether stop smoking services in the community were having the impact that they should, with SLaM making 595 referrals to the service and having only 9 people successfully quitting.
• Mary talked about the evidence based treatments for tobacco dependence and advised nicotine replacement therapy in the first instance but e-cigarette in the second instances – as they are 95% safer than smoking tobacco.
• There were a number of questions and reflections on Mary’s presentation.
o David suggested that we need a consistent messaging through various organisations about tobacco dependence.
o Sarah highlighted that the tobacco dependence budget in local authority has been cut significantly and that cannabis smoking has overtaken tobacco smoking, with many people doing both together.
o Joiss suggested that we need to be realistic and understanding about number of attempts that are necessary to quit and Mary agreed, saying that on average it takes somebody with SMI 14 attempts to quit.

Regular Updates
LWN Alliance
• Sue updated on the Living Well Network Alliance and explained that the single point of access, mobile response unit and front door are all planned to go live on July 1.
Crisis Sanctuary
• Chris updated on the Sanctuary, which has become a 7 night service from April 1.
• Service is seeing 7-10 people a night and a number peer supporters are involved in delivering the service.
• The official launch of the 7 day service will be on May 23, from 3-5pm and as part of the Open Event on crisis services.
SLaM Service User Involvement Group
• Alice and Emma updated on a comedy school programme, which focuses on stand up comedy and improvisation. This runs in spring and summer term at recovery college and has been extremely successful so far!
• There was also an update on the launch of SLaM’s Changing Lives strategy, and a number of engagement events will be taking place around this.
Black Thrive
• Natalie updated on Black Thrive and explained that they are currently working on developing their priorities.
• The Shared Measurement System will be soft launched in June with partners, ahead of a broader launch in October, which will be open to the community.
• It was suggested that the October Collaborative breakfast is spent focusing on the Shared Measurement System and the LWNA Outcomes.

Collaborative Research
• Manju updated on the research that she had been doing, having attended the Collaborative for a number of months and looking at how it is making an impact on people’s mental health.
She will be carrying out some structured interviews with a range of people across the system and the plan is to develop a toolkit, which can be implemented by other London boroughs.

Finally, the group sent thanks and good wishes to Jonathan Morally and Mark Young who have left recently. Jonathan, whose vision has helped to shape the Collaborative website has been a valued Support Worker at Mosaic Clubhouse for 11 years. There were cakes, presents, speeches and a rendition of ‘One Love’ at the Clubhouse farewell. Meanwhile, Mark Young, who has moved to Mind in Hackney worked for Thames Reach; a former Community Support Guide Mark was involved with the Collaborative Assessment, Action, Planning prototype in 2012, which led to the setting up of the Living Well Network Hub. Latterly, Mark was Alliance Lead Manager, part of the dynamic team IPSA (Integrated Personalised Support Alliance), helping to change the lives of those who have spent years in care homes and on hospital wards . All the best to both.