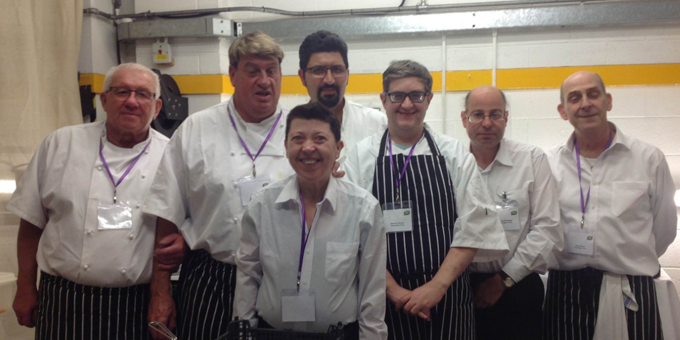 First Step Trust (FST) continues on its journey to get Owen, a 1969 Renault Estafette back on the road. A freshly welded Owen was unveiled at a successful fundraising event at the Woolwich garage on October 5.

Those attending were dished up an extensive and tasty menu by Abbeyvilles restaurant & catering, the other arm of FST (the amazing team is pictured above). http://firststeptrust.org.uk/fst-projects/abbevilles-restaurant/

FST aims to support those who may be suffering with a mental health condition, recovering from drug and alcohol addiction, or other disadvantages including repeat offending.

At the Woolwich garage, sponsors new and old were able to inspect the freshly painted and lacquered Owen at the event and there were further opportunities to support the venture. When he is fully restored Owen will be hired out to create three First Step Trust jobs. See update below.

Some of the people who have benefitted from FST include Anton who was first introduced by his key worker as part of a return to work scheme. He joined the Driving Ambition Course as a way of building up his confidence. Once the course was completed Anton decided to undertake a placement in the garage (FST has garages in Woolwich, West Norwood, Crayford and Salford)learning the basics of being a technician in the car industry. That was back in 2013, and Anton continues to attend First Step Trust as he feels he is learning so much, and it helps him to deal with his mental health issues.

Brady, 31, completed a degree in Architecture, but after being diagnosed with a mental health condition he did not think that anybody would employ him. Brady’s confidence was shattered. He was referred to First Step Trust by his care worker who thought it was a good step to take, and he welcomed the opportunity to work in a real environment with hands on training in both the office and the garage. A quick learner, Brady has now been with First Step Trust for nearly six months, and as well as teaching other workforce members, he assists with the British Health and Safety Training, which has greatly increased his confidence. He now feels that with the opportunities he has been given and knowledge he has gained whilst at First Step Trust he is being well prepared for the job market.

Raj was referred to First Step Trust by a Lambeth mental health team back in 2001 when the project was based in Brixton Hill. He worked on the Gardening Project for four years. This got him back into a work routine and helped him with his attendance and punctuality. Raj enjoyed the work and learnt new skills, for example, how to use and maintain machinery, and how to work successfully as part of a team. Raj was out of the country for a while, and found it difficult to get a job when he returned. He was unemployed for nearly ten years when his mum suggested he contact First Step Trust again. He started a placement in the garage learning mechanics and a little bit of admin. Raj attended Employability Training Sessions and successfully completed the British Health and Safety at Work Level 2 Course. Being involved in these activities gave Raj the confidence and help to get a part-time job in the fast food industry.

Isla, 41, completely lost her confidence after losing her job. She did not believe that she would be be able to find another one, and became depressed. Isla didn’t know what to do as she felt useless, tired, lacking in energy, surrounded with anxiety and negative thoughts. She got tearful easily, couldn’t sleep, and became exhausted with life. Isla was on medication, but it wasn’t a good solution to overcoming her problems. She spoke to her Jobcentre advisor who referred her to First Step Trust. Isla particularly enjoyed the finance tasks in the office, but really wanted to get back in to HR which was the area she had worked in before. Isla went from strength to strength as she learnt new skills and was able to pass on her knowledge to other workforce members. Isla started to regain her self-worth which helped her to apply for jobs. With each interview Isla grew in confidence, and is now in full-time employment as an HR Assistant in a secondary school.

Special thanks to Gail Dawson for case studies.