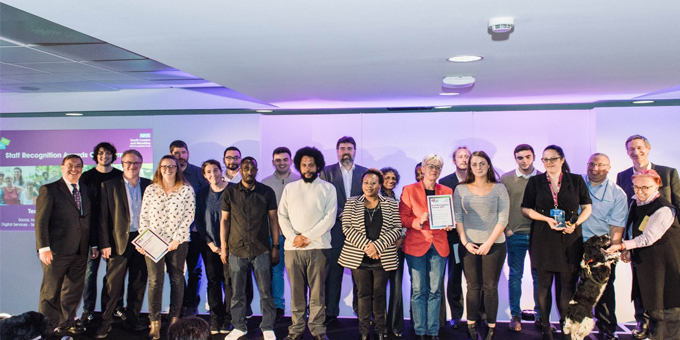 Heart felt wishes to peer supporter Garry Ellison who was a runner up in the Transforming Lives category of the South London and Maudsley NHS Foundation Trust 2017 Staff Recognition Awards, held at the Kia Oval on September 25.

Garry who works as a peer supporter with Solidarity in a Crisis, including at the Evening Sanctuary was recognised for his work as Peer Recovery Trainer at the Recovery College (Social Inclusion and Recovery Corporate Occupational Therapy).

Nominators highlighted Garry’s ‘unwavering commitment to supporting service users’, including shaping his own Recovery in Action project. Garry had worked with a woman who had previously attended A&E over 100 times after a traumatic incident. ‘Garry took slow steps to build trust and helped her turn her life around’.

The judges said Garry has ‘helped transform many lives, giving hope to those on the wards, working with those in crisis and those who are isolated in their own homes’.

Garry said he most enjoyed using his lived experience with people on their recovery journey. “What I try to project is that most people at some point in their lives struggle with mental health. ”

Among the 160 nominations, Lambeth’s Social Hope and Recovery Project (SHARP) and Home Treatment Team were runners up in the Team of the year Award. The judges praised SHARP for its creativity. ‘They involve service users in a lot of ways, including in a football team whose successes have led to a cabinet full of trophies!’

The Home Treatment Team was also nominated by a carer who ‘really rated the team for their support and the way they engaged with her daughter. It’s clear that the team is dedicated and passionate about their work.’