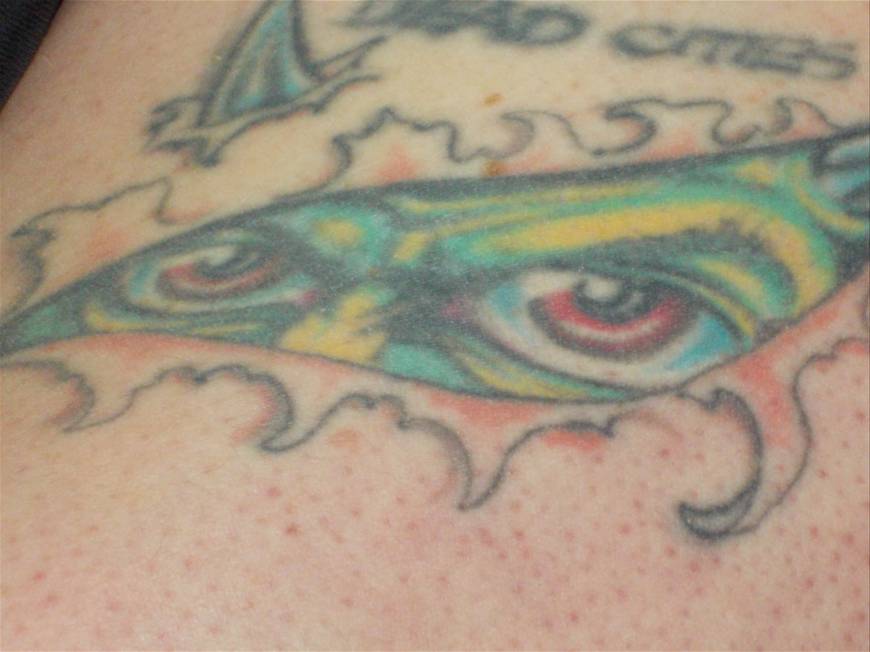 Peter Duncan’s tattoo is more than a work of art – it’s his reality check and a stark reminder of the “demon depression that keeps holding me back”.

“I see those demon eyes staring out at me whenever I get nervous in a crowd…” says Peter of his tattooed arm. Peter has suffered with depression since his mother died in March 2011. But despite the dark days Peter is making great strides… taking control of his life in his various volunteer roles and finding the therapy that works for him.

Peter, 47, had been caring for his mum for six years when she died unexpectedly after an accident (his dad died in 2011). Four days later he suffered an angina attack… and his situation got worse when the council tried to evict him from the family home of 44 years. He felt suicidal… “I didn’t want anything except someone to talk to,” he says.

Peter believes (as well as medication) it was timely referrals that helped him take the first steps on his road to recovery. Firstly, from his GP to a therapist (via the Improving Access to Psychological Therapies service in Lambeth) and then to Status Employment, a service that supports people to get back towards work.

Although he hadn’t worked for 12 years meeting Status’s Phil Fuller, Senior Employment Advisor, has given him hope for the future.

Peter brought his rich background to the weekly and later monthly meetings with Phil. He had left school at 13 after being bullied and was self taught. He became a punk rocker at the age of 16 and had done a spot of acting and later became a doorman at a bikers’ club.

“Phil was marvellous, really good; he helped me look for voluntary work,” says Peter. This has seen him on the reception desk once a week at Vocational services, Beale House, which Peter says has helped turn his life around.

“The staff are extremely pleasant which helps if you come in after having a bad week… it makes me feel wanted.”

And other opportunities have blossomed; through the Volunteering for Well being programme Peter joined the 12-week Friends of Archbishop Park (Peabody Trust) gardening project.

Despite being incredibly nervous Peter says he had to go out and “face the demons inside myself… to find the determination to push myself.” And he is surprised by how enjoyable it was meeting other people, planting, digging and watering. And what advice would he give to others?

“Try and go out and face something that you know you can’t do and put body and mind.”

Sarah McDonald, Volunteering for Well being Project Manager is passionate about how volunteering and connecting can be a positive force in recovery. “It is a pleasure having Peter volunteer here at Beale House, and we appreciate his contribution to the gardening project at Archbishop Park. He has proven a committed, reliable and a caring member of the team,” she says.

“Volunteering is a great way to feel connected to your local community and improving well being. Peter’s story illustrates this well. Since being supported to volunteer I have seen his confidence grow, and it’s great seeing him set new goals and take up new challenges.”

These new challenges have also encompassed a personal health trainer and weight watchers and involvement with the Expert Patient ‘New Beginnings’ programme addressing depression and anxiety… “I have met some wonderful people and it’s really boosted my confidence,” says Peter. Such is Peter’s success that there may be an opportunity for him to become a tutor in the future. Melanie Francis, the programme’s co-ordinator says she saw Peter (the only man on the course) grow from “cocoon to butterfly” over the seven sessions. “He really took control of his own life. He’s got so much determination and has also been helping lots of other people, he feels useful.”

And it doesn’t stop there. Recently Peter has become a drama support assistant on a 12-week drama course, which has received two years funding for a programme circus art and drama alongside employment support. Peter took part in the peer-led drama course run by Status Employment last summer and now wants to support others. He helps with administration and phones people to encourage them to attend.

“I feel they are giving me an important job to do and it makes me feel valued, he says. Peter admits he still gets the demon wobbles, but that’s why, “I want to give to other people because I know how it feels.”