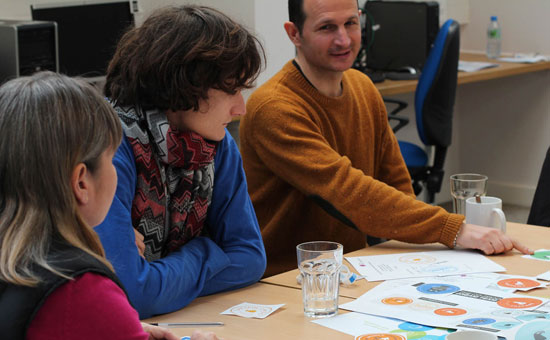 “There’s lots of will for us to make this work,” says social worker Bartek Zaniewski on day one as the Living Well Network Hub (the hub) opens its new ‘front door’  to mental health services in north Lambeth.

Bartek (pictured left) has been charged with co-ordinating referrals coming into the hub (based at Elmfield House in Stockwell) and there’s an air of anticipation as this new team, with an ambitious remit, waits for the phones to ring. The hub is pivotal to all those referring into north Lambeth’s  mental health services. It is endeavouring to do things differently – in the words of the Lambeth Collaborative (the driving force behind the changes) ‘turning the system on its head’. So more back-up to GPs so that people experiencing distress can be supported earlier… before they reach crisis point. Equally for those in transition from the secondary care Community Mental Health Team (CMHT), to their GP (primary care) there is a commitment  to reconnect people to their communities and help them to find ways to be more resilient so they can get on with their lives.

Those entering hub environs are being offered up to 12 weeks’ tailored support in a personalised plan – ranging  from psychiatric input, specialist voluntary sector support, to help with someone’s daily living skills, employment, benefits, for example, and peer support.

As a former care coordinator with the north’s CMHT,  Bartek knows how tough it is on the caseload heavy frontline. “The hub brings the opportunity to respond beyond crisis,” says Bartek, “to not have to say ‘no’ to people”. The new approach means support for those who don’t meet the criteria for secondary care services;  for all who pass through the door “finding ways to change what happens quicker, and that’s not replicated”.

Bartek says he wanted to do something “more consistent with my social work training, around social care and recovery”, and brings his frontline expertise to the hub’s  multi-disciplinary team of senior practitioners.  Referral to the new integrated clinical and social care service means a person’s needs can be identified quickly (the team brings nursing, social work and occupational therapy expertise) and triaged to appropriate support.  So if needed Bartek will speak directly to the CMHT if someone requires secondary care; but the hub also works with nurses from primary care (through the Primary Care Support Service, or Pass team) and the voluntary sector (Community Options Team, COT).

Diana Alfageme has been working with the Pass team since its embryonic days, helping to shape how GPs might be supported around their patients’ mental health. The  team of four mental health nurses is working across four GP clusters in north Lambeth, up to seven practices each, and spending between one to three days a week at identified surgeries, working with patients and their GP. Working in a GP practice has “opened up my ears and eyes” says Diana who brings a wealth of experience to her role.

After qualifying as a mental health nurse, Diana worked as a forensic mental health nurse with clients in medium secure units, primarily with clients serving long periods of admission and detention. What was important in these situations was addressing the person’s holistic needs within the restriction of their detention status. Moving into care co-ordination in 2008, was a ‘”shock to the system…. and a massive learning curve”, says Diana of the more lone worker approach. The focus on caseloads, risk and clear documentation, meant you “never switch off” and it was difficult to balance this with the therapeutic relationship you want with the client while also having to keep ahead on issues around benefits, housing and so on.

Diana’s calming personae would put anyone at their ease, however, working in primary care has meant further adapting her skills and her approach and she has been surprised at how much can be achieved in a relatively short time span with the ability to work more creatively with the person directing their own support needs.  It’s early days and it is an ongoing learning curve. She tells me of someone she’s been working with who suffers from depression who had not appeared to have made much progress for a number of years. However, after 12 weeks things seem to be changing ( as reported by GP). The person had struggled with their medication, had tried counselling and felt very stuck. Now things are improving… The person’s meds have been reviewed and adjusted, her mood is lifting and she has been motivated to reconnect with counselling. She reported she benefited from seeing Diana at the GP practice, knowing that there was seamless communication and care between herself and her GP. She also benefited from sign posting to benefits agencies and knowledge that there was a wealth of non-statutory services available within primary care.

“It’s still early days but it feels it is running well, ” says GP Raj Mitra from the Lambeth Walk group practice in Kennington. “Having Gideon Lamptey (from the Pass team) with us once a week is helping us better coordinate care for patients with serious mental health issues. After 18 years as a GP it’s like a dream come true. It’s a big step for us to be able to have this access, previously it was that you had to be referred into secondary care to get any support, now they are coming out to us and it links to the voluntary sector.”

Mark Young, manager of the Community Options team (COT), which brings a group of voluntary sector organisations to the hub, says the individual’s needs are important.  He is inspired by the new way of working. Mark was involved with the original Collaborative AAP (Assessment, Action and Planning) prototype, which helped to shape the hub’s new front door.

“The joint working approach is really positive, especially the daily referral meetings and the two-hour weekly review where we discuss people in more detail, ” he says. “Access  to the 12 week support isn’t sealed in stone and there’s lots of flexibility and I feel listened to and that suggestions are taken on board. It’s all about what benefits the person and we have to be guided by the individual.”

It is also about people understanding ‘the offer’ (Collaborative/hub language for what’s on offer should people be referred). For example, where relevant people can access a  personal budget –  it could be for something like a camera, or a course that helps someone’s well being. There is also the added dimension of both formal and informal peer support.

Missing Link peer supporters share their lived experience and can meet those referred to the hub for up to 12 weeks in the community.  “I think the hub team are really open to doing things differently and as such appreciate the contribution of peer support, ” says Missing Link Coordinator Lucas Teague (pictured right). “I think there is still some way to go though in getting peer supporters properly integrated. Presently the budget covers peer supporters to offer 2 hours paid work with their peer, we need additional capacity for more of them to attend the client review meetings. From what we’ve seen with the original AAP prototype having the right mix of people around the table in the right numbers helps to change the dynamic and bring a different perspective. This is crucial if we are looking to view mental health issues jointly within a social and clinical context.”

The hub team has come a long way since it waited in anticipation for the phones to ring. Since that day some 286 referrals have passed through the new front door.  The focus remains on targeting resources and identifying needs.

Bartek explains: “People may be functioning fairly well, for example, if they suffer from depression or anxiety, they may not need 12 weeks support, so it is about finding ways to build skills/confidence;  they may be waiting to see the IAPT (Improved Access to Psychological Therapies) so it might be about getting someone to do something everyday that’s focused and targeted.”

It’s a demanding time but Bartek likes his job. “I find being in a position to help people a privilege,” he says.  “Our task is not that much compared to what some of the service users and carers have to do to get through each day, we have the opportunity to ‘step back’, they don’t. Sometimes you do get fed up  but then usually one of your colleagues or a positive shift in a client’s circumstances gives us a much needed lift.”

People can be introduced to the hub by their GP and it is hoped that self introduction will be piloted soon.