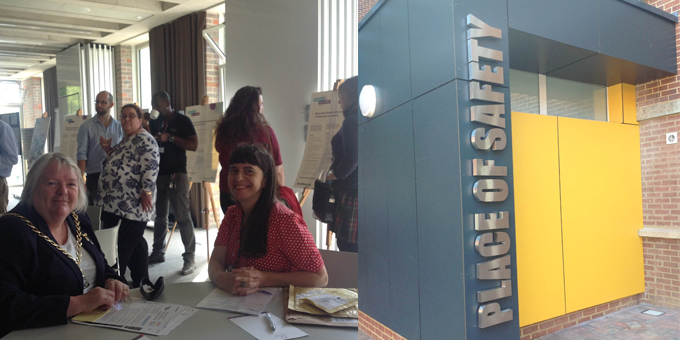 Service users and carers are among those whose views have helped to shape a new Central Place of Safety (CPOS) for those in mental health distress being brought by the police to a safe site under section 136 of the mental health act.

Currently there are small places of safety in the four SLaM (South London & Maudsley NHS Foundation Trust) boroughs of Croyden, Lambeth, Lewisham and Southwark. The decision for one centralised site has come after lots of discussions. SLaM has created a special Project Board, which includes its service user/carer advisory group and special interest group. It has consulted widely since 2014 on the new building, housed on its Southwark site. This includes speaking to 100 people who have experience of being taken to a place of safety, as well as families and other organisations.

Those who have been involved had a chance to tour the site at a special Open Day in August. The Mayor of Southwark, Cllr Kath Whittam was among the guests and is pictured with Victoria Glen-Day, Clinical Service Lead, Acute Care Clinical Academic Group.

A carer consultant commenting in the Engagement report, which gives an extensive overview of feedback, sums it up thus: “The aim of this new Place of Safety is to provide a haven of protection, expert skills and gentle care to those in extreme need at a time of crisis. In this situation people are ultra- sensitive to their surroundings and a small, dedicated band of service user consultants who regularly attend meetings have greatly influenced the introduction of many of the features and little touches those being cared for will most appreciate. They have been there, they know what matters to people at a time of crisis. All credit – and power – to them.”

An opening date will be announced shortly.
Click here to read the report.
Karen Hooper