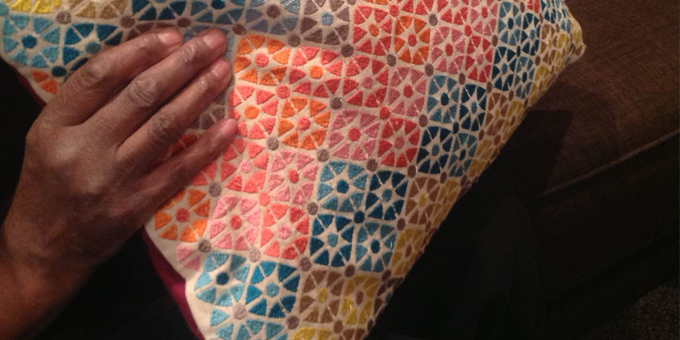 Bernadette’s story was never planned to be read out loud but as she is visually impaired, this is how I have shared it with her… and it is a story that needs to be heard.

In another place, Bernadette may have been locked away for the rest of her life, here now on this recovery journey, I find hope. When we first met, Bernadette was living in a small residential placement, anticipating moving into her own home as part of Lambeth Collaborative’s innovative IPSA (Integrated Personalised Support Alliance) initiative.

What became apparent as she shared her story with me over lunch, walks and cups of tea was that with appropriate, timely and personalised support such as this, people can build resilience and strive to live more independently.

What moves me? In the 13 years she spent on secure wards (in five different hospitals) the maximum unescorted leave Bernadette was granted was for three hours a day. She found it “liberating to have a look around the shops, go to McDonalds, Greggs, go for pizza… in the summer I would go for a walk and just sit there in the warmth …”

A survivor from the outset, Bernadette was born in 1958, a year after her mother arrived in the UK from Jamaica. She was born blind, with a hole in her heart and with mild learning disabilities. “I had a cornea-graph op when I was a toddler and that was exciting… when I woke up I could see for the first time in my life,” she recounts as if it were yesterday. “The sun was shining through the window, I had to wear a pair of mittens so I couldn’t scratch my eyes and I saw that they had blue ribbon.”

She has been institutionalised most of her life. “I lived in a home outside London between the ages of three and six, I was glad to get out; it felt like I was being treated badly and I was longing for my mum and she came to get me.

“Life got a bit better around seven when I went to a school for the blind, then later a ‘physically handicapped’ school. “I was used to being with blind and partially sighted kids and had to adapt quickly to kids in wheelchairs.” Later teenage years got more difficult and she was expelled from two schools.

Years followed in day centres, a sheltered workshop and staying at home. “I felt like I wished I’d had a proper job.” The work scheme in the 1980s helped her to feel valued, she trained in telephony and was really enjoying herself, ” until someone caught me drinking shandy and I was sacked”.

The death of her friend, an uncle and her dad in 1989 was pivotal. “I was drinking and didn’t know what I was doing and ended up in prison,” she says of the years that followed as her life spiralled out of control. There was no support as she moved to a hostel and then into her own flat. “It was two and a half weeks in my flat that I felt I became mentally unwell, something serious happened and I didn’t know it had happened. I was arrested and bailed to the Maudsley. I thought I would go back to prison but ended up in five different hospitals.”

There were numerous suicide attempts, a diagnosis of recurrent depression and disocial personality disorder. She was also diagnosed with glaucoma and diabetes.

“There was nothing to do… I had to break the cycle. It was going to the therapies and wanting to see my family (her mum, brother and four sisters). It was tough, but I worried about vegetating.”

Something changed in 2012. “I started to feel better about myself. I started to read books about depression and diabetes.” Bernadette’s care coordinator broached the possibility of her moving on after numerous tribunals and a conditional discharge in 2013. “It felt a bit strange after 13 years”, but after the claustrophobia of life on wards (the maximum with up to 24 women) Bernadette wanted her own space. It started with the placement, then ensuring the appropriate support to take the next steps.

A place to call home

“I don’t like sharing, I need a reasonable size space that’s nice and cosy, a space to call my own,” Bernadette told me and over the weeks that dream unfolds. The BRiL (Brokerage and Resettlement in Lambeth) project is increasing the availability of independent accommodation for those who are ready to move on. I do a reccie with Thames Reach property manager Andre who sources the properties on the open market and works with Thames Reach staff in the Alliance Rehabilitation Team (ART). When I visit what is to be Bernadette’s place, the enormity of the change she faces really comes home.

In practice that means a dedicated multi-disciplinary team, that puts the individual and their assets at its heart.

Bernadette is impressed with this way of working. “It’s like an umbrella, and people have been working well together.”

She speaks highly of Mary her support worker (from the ART team) who along with a highly specialised team has ensured her move has been as stress free as possible. This has included organising adaptations to the property, helping Bernadette employ a personal assistant (PA) and selecting furniture. Bernadette says Mary’s sense of humour and ability to respond when things don’t go according to plan have been crucial.

Bernadette has accessed courses, including – It’s Your Move, to help her understand her tenancy, How to be a good Employer, for work with her PA, and Eating Well for Less.

Caroline, Bernadette’s social worker and placement review officer says Bernadette’s case illustrates the value of having access through one team, which has assisted her transition and ensured her well-being.

“She has been supported to employ her PA and to have Telecare (monitoring service) installed in her flat through her social worker and support planner broker. Her psychiatrist and care coordinator have supported her with her mental health needs and finding activities in the community for her to do. The occupational therapist has advocated for the move into her flat (supporting her team to choose the right flat, providing her with cooking sessions and suggesting strategies and adaptations to the property).”

Caroline adds that the PA agency has supported her to employ a PA of her choice and runs the ‘good employer’ course, which she has found useful. Her support worker and PA have helped Bernadette set up her bills and feel settled in her new home.

“Myself and her support worker have worked really hard to ensure that she feels ready and prepared for the move into independent accommodation. It’s been really useful to have a team around us to draw knowledge and skills from. Of course, the most important person in this all has been Bernadette. It’s been really good to work with Bernadette because she has been so motivated to change, is open to new ideas and wants to be independent.”

I have visited Bernadette a number of times since she moved into the bright, cosy studio flat. It’s working well with her PA, “she helps me cook, clean, shop and attend hospital appointments”, she says.

I ask Bernadette what photograph would best illustrate her home for the story and she suggests the brightly coloured cushion that she is holding, “bright colours represent me, bright makes me happy”.

I ask her what shall I tell people in meetings when I present this story?

“Tell them this is brilliant, I never thought this would happen, it’s a real achievement for me…
Family is important
I came out through the other side
I am living life to the full
and getting the support I need .”

– IPSA aims to save 23 per cent (around £2.8m) against the current budget of just over £12m, by the end of year 2.
– By completion of the project 20 people will have moved into BRiL properties.

Mosaic is still running at full steam during quarantine! 'In the Mo' is a newsletter created by our members, and fo… t.co/FgndqYGS6g

Retweeted by LambethCollaborative
2 days ago

Solidarity in a Crisis Manager Mathieu Smith sends this moving testimony about how the peer-led service is showing… t.co/MjIcI86qGH

📍More #Coronavirus support for vulnerable people➡️Register if you have a medical condition that makes you extremely… t.co/JTfnSD9gHX