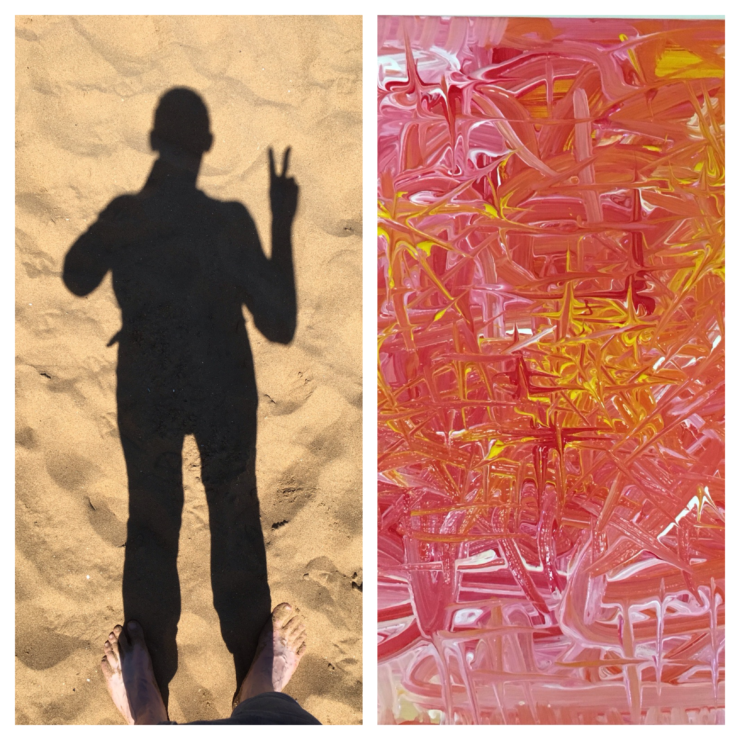 “It was always my plan to try to be kept busy till the summer and lockdowns slowly got lifted. And now I feel I’m at my story’s end – I have achieved most of the goals I set and am now on the way to achieving my ambition to be a mental health nurse…”

Gavin is joyous, he has just found out he’s got 10 distinctions in his final exams (Access in Health and Science) and been awarded one of just five prestigious Student of the Year Awards from Morley College. Last stop –  confirmation of a university place to start his mental health nursing degree in September.

“I told myself, I will do what I can do and not give myself a hard time and it looks like it paid off.

It’s so inspiring reflecting on these achievements with Gavin years on after our initial meeting in 2015. Then we met at Shakespeare’s Globe Theatre thanks to his support worker Debbie who encouraged his passion for theatre and connected us while I was working there.

We met at a performance of Twelfth Night and I had to question, was this really the same person who had struggled so much with his mental health, which had led to him spending periods in hospital and retreating to what he describes as the “dark and deeper side”… As a member of the Lambeth Living Well Collaborative I was also capturing people’s stories for the website as they journeyed through a system in change.

Gavin’s  journey illustrates that taking a different approach to someone’s crisis can help them move forward in their life. He was an early customer through the ‘new front door to mental health’, then known as the Living Well Network Hub, which has transformed into the wider Living Well Network Alliance.

“It wasn’t easy, but I couldn’t face going back into the system and hospital,” says Gavin. “Then something happened via the Hub, my support worker Debbie encouraged me to go for an Access to Drama course and Emma the then hub manager got the SLaM (South London & Maudsley NHS Foundation Trust) referral to the then Cawley Centre, along with the ongoing support from my GP Dr Raj Mitra, it helped turn my life around.”

Gavin admits though tough at times, (including later changes to the structure at the centre) “those days at the Maudsley hospital finally properly addressing my mental health for the first time as part of the community there was important. This was also when the whole personality disorder diagnosis was being highlighted more and through this plus recognition of Bipolar 2, which I already knew a little about, I was given a platform to work on identifying myself and learning the skills to help in getting better when I needed to.”

Behind the scenes and outside of his time at the Maudsley, Gavin had just started the drama course, so it was a challenging time –   ‘have to read Tempest by thurs, studying Brecht and have been to see Diary of a Madman at the Gate Theatre’, he reported in an email to me in 2016.  ‘Am doing my final exam for GCSE English literature. I got an A in the mock a few weeks back so exciting stuff… Lots going on. Good days, bad days. Days I want to scream and days I just can’t stop laughing…’

“But I did it and enjoyed it. I was very anxious beforehand though and had to really try to channel well being and confidence so my mental health issues would not win and ruin things.”

Gavin adds that it was the peer support from others that was at the heart of his recovery. “It was the first time in my life that someone else was speaking my language and I am thinking , they are telling my story.”

He was able to express himself as an artist too and four of his paintings (including the one pictured) were shown in the hospital’s Long Gallery in an exhibition in 2016. He also worked with other students on a large collage that was displayed.

He says he has also benefited from SLaM’s Recovery College workshops including one on sleep, “so I have gained so much on how to learn to live with my own mental health and struggles I’ve faced all my life.

“As a 45 year-old gay man I am now really comfortable with who I have become and the other patients/service users and help I have received all helped play a huge part in this …a lifeline really. It’s a shame I never got access to these earlier in my life but maybe that’s a good thing really as I think I have appreciated this help much more as I have got older.”

Also crucial to his recovery and in the background throughout has been Gavin’s GP. “He has been brilliant. Before I would try to check in with him every three months and though that hasn’t been possible during Covid, I know he is there to support if I need him. We look at my medication and keep an eye on that. He has always encouraged my drama courses. Yoga. Breathing exercises and stretch. As a result, in regards to well being and general tips on maintaining some balance in regards to my own mental health, he is a great knowledgeable supportive doctor to have. I generally feel I can go to him if I feel I need some advice / support.”

“My mental health is what I have, not whom I am,” says Gavin explaining that lockdown gave him the opportunity to explore and focus on his ambition to be a mental health nurse. This meant working towards an Access in Health and Science course.

During the lockdowns he took a Level 2 certificate in Awareness of Mental health problems, then TQUK certificates, including  Counselling skills. He is impressed with SLaM’s Vocation Matters and praises Shaun Williams who has been a great support more recently as he got stuck into his venture at Morley College. He now also has a support worker through Shaun’s help called Eliza at Vocation Matters. “Having her to keep in touch with has been a tremendous support, especially in preparing for university. I have a lot to thank them for.”

He also took up some early intervention work experience in Coventry during his first half term on the course and enjoyed attending Mosaic Clubhouse until Omicron and the course became more demanding.

In the past he has volunteered for Crisis at Christmas and at the Cardinal Hume charity shop in Victoria .

It’s been a long journey and his former support worker Debbie who now works in a “multi-disciplinary team that supports people with long term mental health conditions in the community,” is delighted to hear of Gavin’s progress.

“As a support worker I work with patients around benefits, social inclusion and activities, repairs, hoarding and any other issues that may impact a patient’s ability to manage in the community,” she says.

“I used to work in the short term team supporting people for up to 12 weeks with access to mental health care.

“I’m so happy to hear that Gavin continues to do so well… I met him right at the beginning of the Hub, so I’m pleased he was able to continue his recovery.”

These sentiments are echoed and summed up thus by Gavin’s GP Raj Mitra:  “When I meet a person in my clinic I listen to their story, I  find out what is important to them and then offer possible ways forward. Helping patients create new stories and seeing them flourish makes my job as a GP, the best job in the world.”