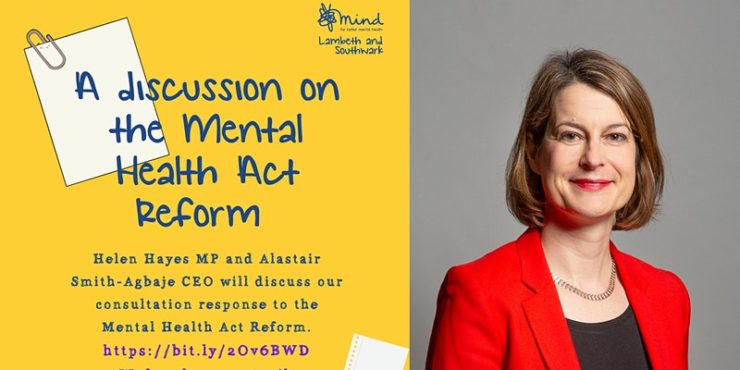 “The Mental Health Act is dangerously outdated and the Government’s Review is long overdue,” said Helen Hayes, MP for Dulwich & West Norwood at a joint event with Lambeth & Southwark Mind as the public consultation on reform to the Act closed that night, April 21.

Earlier the MP had handed in the submission to the Department of Health on behalf of Lambeth & Southwark Mind. See below.

“Across my constituency we have high incidence of mental ill health, and many local residents with lived experience of being detained or seeing a family member being detained under the Mental Health Act,” Helen told the well attended zoom event.

“We know that there is appalling racial disparity in mental health, with Black African and Caribbean residents eight times more likely to be detained under the Mental Health Act than white people

“That is why it is vital that the voices and experiences of residents across Lambeth and Southwark are listened to, and I am grateful to Lambeth & Southwark Mind for their work on this detailed submission,” she added.

Lambeth and Southwark are highly diverse boroughs with significant Black Asian and Minority Ethnic communities – particularly those of Black ethnicity (around 25 per cent). Twice as many people of Black heritage are likely to have a mental illness compared with their white British counterparts.

Alastair Smith-Agbaje, CEO of Lambeth & Southwark Mind said: “The event was a great opportunity for people to come together to discuss how disproportionately affected Lambeth and Southwark residents are by mental health inequalities. We look forward to working closely with Helen Hayes MP, and other key stakeholders in the community, so that we can continue to represent the interests of Lambeth and Southwark residents as changes to the Mental Health Act are brought before Parliament”

The event focused on the topics of the submission, including a push for culturally appropriate peer support groups, advocacy, and counselling in order to help tackle ethnic discrimination.  Helen Hayes promised: “I will continue to work with Lambeth & Southwark Mind to engage local residents and hold the Government to account for delivering reform of the Mental Health Act which removes racial disparity and delivers the mental health provision our communities need