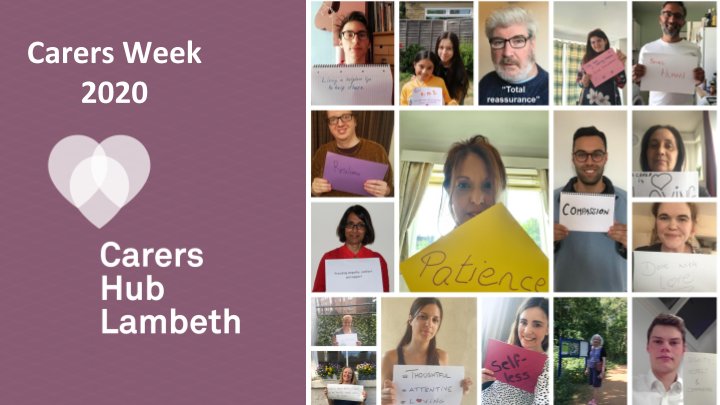 As a result of two successful Carers Focus weeks in 2020 another was held in February 2021.

In December 2020 Lambeth SLaM (South London & Maudsley NHS Foundation Trust) held a second Carers Focus week with the intention of building on the attention and profile carers’ issues had gained from the first event in September.

The week in December focused on community mental health teams in Lambeth and was run in partnership with Carers Hub Lambeth.

“It was great to take part …” said Polly, the hub’s Carers Strategy Development Manager. “Both my colleague Beth Taylor and I were struck by community team members’ interest in finding out more about support for unpaid carers in the borough.

“A key take away point from the conversations, was the crucial role that professionals play in referring unpaid carers to local support. Carers are often juggling so many responsibilities and stresses, that their own needs often fall to the bottom of the pile. By taking that extra step and making a direct referral rather than signposting, professionals really can help make a huge difference to a carer’s wellbeing.

“If you work with carers who might benefit from the 1 to 1 support or range of peer groups and activities offered by Carers Hub Lambeth please don’t hesitate to connect them to us.”

Feedback from team members was that they felt more able to describe the variety of support available to carers in Lambeth, and understood that they may need to refer rather than just provide information.

In addition, as a result of the meetings a member of staff volunteered to take on the role of the carer champion in her team, linking into Carers Hub Lambeth and supporting her colleagues to explore carers’ needs more fully.

These were held virtually and accessed by Lambeth Hospital ward teams during time normally scheduled for their business meetings. Speakers from Carers Hub Lambeth, SLaM’s carer support service and a carer from SLaM’s involvement register attended. Topics covered were, the need to identify young carers, the importance of communicating with carers and keeping channels of communication open even if initially service users do not want personal information shared. Staff also had a chance to hear about the Lambeth carers card.

Carers and staff interested in being involved in future events are asked to get in touch with Lee Roach Carer Lead lee.roach@slam.nhs.uk