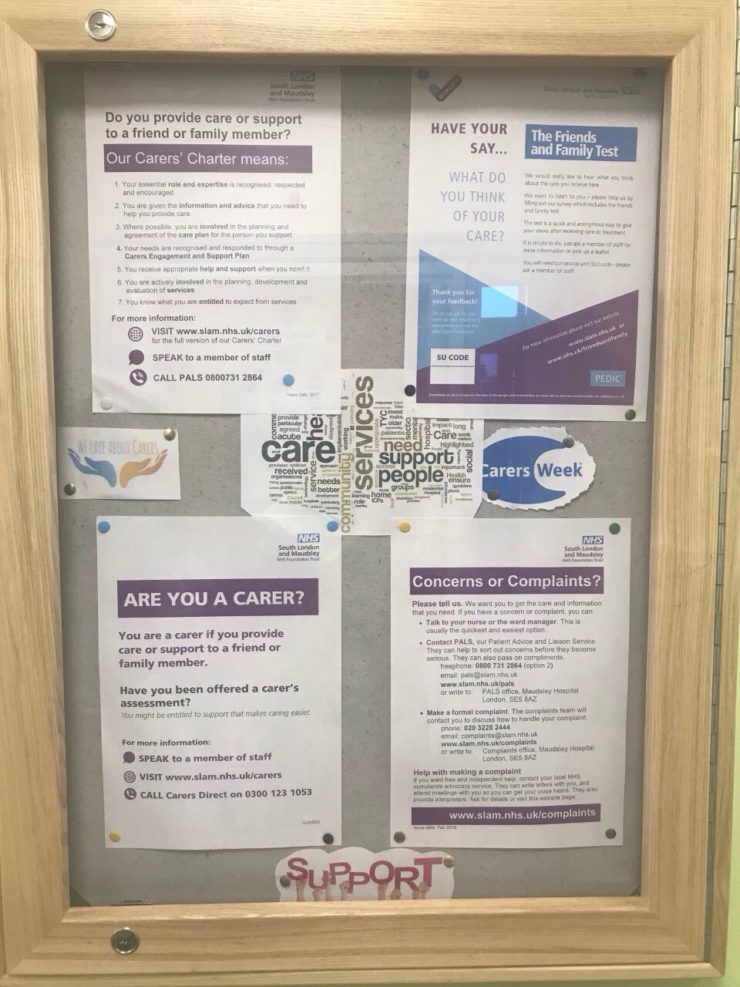 Following a suggestion from John Lavelle, Lambeth Adult Service Director that the borough services needed a focus week on carers, Richard Stiles Deputy Director for Community services and Lee Roach Carers Lead set to work on discussions with carers and staff about what this might look like.

Alice Glover, Patient and Public Involvement lead provided links to carers on the involvement register who could be consulted and perhaps would help to build a programme. From these discussions via Teams and by phone a plan emerged for a number of activities focussed on community mental health teams (CMHTs). These teams had recently adopted “carer champions” – members of staff who agreed to be updated about carer resources to disseminate to their colleagues and to raise the needs of carers in case discussions within their teams.

A number of carers agreed to speak to the CMHTs about their personal experience of having a loved one receiving services and four meetings with eight CMHTs took place over the week. The format was similar, with members of the CMHTs invited for 30 minutes to listen and then ask questions. All the meetings were well attended and staff were engaged.

Team leaders reported greater discussion of carer needs following the meetings. Staff commented how they had previously worked closely with carers but focused on the patient, seeing the carer only in terms of how they support the patient. This short discussion had changed their thinking. Now they realised carer needs are distinct and require consideration separately from the patient. Staff said what came out were the benefits of sharing information with and from carers and the importance of their involvement with care planning.

There were consistent themes during the course of the week’s events, which also featured two regular carer groups run by services and a virtual round table discussion attended by Guy Swindle, Deputy Director of Lambeth Living Well Network Alliance, carers and staff. Carers throughout the week voiced frustration at not being provided with up to date teams’ contact details so they could talk to them in confidence. Indeed, some reported not being aware they could talk in confidence with CMHT staff.

Care planning and the content of plans was brought up by carers, who pointed to the focus often being on medication and symptoms whilst ignoring significant events reported by the patient and carer, for example achievements in work and education. Carers whose loved ones receive services from SLaM can request and should be offered a carer support and engagement plan. This is partly a confidential care plan for the carers, which can include resources of support, key contacts, telephone numbers and crisis planning.

Plans are being made for a future carer focus week in December. Carers and staff interested in being involved are asked to get in touch with Lee Roach Carer Lead lee.roach@slam.nhs.uk